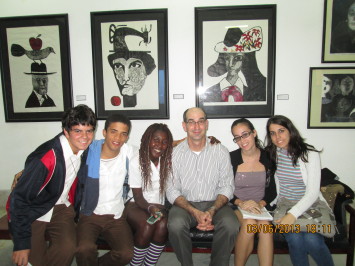 Four years ahead of the renewed diplomatic relations between former archenemies U.S. and Cuba, Lorenz and his MSU colleague Rene Hinojosa have taken students on a study abroad program to Havana in order to experience the culture of a rapidly changing socialist nation. Initiated in May 2012 and titled Culture and Sustainable Development, this program studies Cuba’s dramatic history, diverse genres of music, and its wide gamut of Afro-Cuban religions against the backdrop of this country’s long affiliation with the United States.The program draws connections between Cuban music and some of the country’s major historical events as they shine a light upon broad themes such as identity, nationalism, syncretism, and transculturation.

Of greatest interest to Lorenz is how today, in the city of Havana, music is visibly contributing to stir the country towards a new era, an era in which the socialist culture established after the 1959 Revolution is merging with an individual entrepreneurship mindset driven mainly by tourism.  In tandem, during his many trips to Cuba Lorenz offered lectures on his music at Casa de las Americas and received performances of his chamber works by MSU College of Music faculty at some of Havana’s iconic concert halls.  He also conducted research to support a future opera on Chacumbele, a Cuban legend of dubious origin with lots of room for re-interpretation.