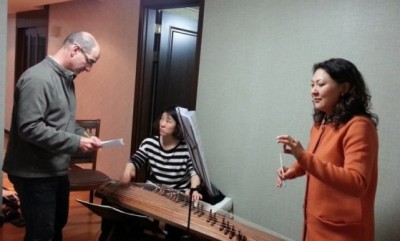 Ricardo Lorenz traveled to South Korea on two different occasions as Composer-in-Residence. In 2013, he was the featured guest composer of that Seoul’s Pan Music Festival, the longest running contemporary music festival in South Korea. That year he attended the performance of his work Compass Points by the Seoul Modern Ensemble and offered talks on his music at the universities of Sangmyung and Gachon. The following year (2014), he was the Composer-in-Residence of the 16th Young-Nam International Contemporary Music Festival held in Daegu, serving as adjudicator of the 31st Young-Nam Composition Competition along with colleagues from South Korea and Japan.  On this occasion, Lorenz had the opportunity to rehearse and premiere Come Back for soprano voice and Korean 12-string gayageum, a work especially commissioned by the Young-Nam International Contemporary Music Festival.