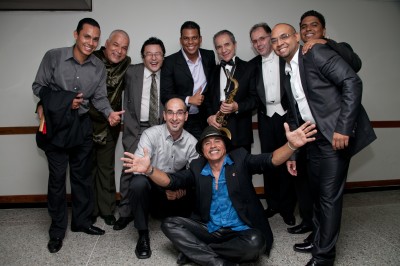 Rumba Sinfónica, a thirty-minute concerto of sorts for Latin band and symphony orchestra, was the result of a close collaboration between composer Ricardo Lorenz and pianist/arranger Jorge Gómez.   Since its premiere

with the Minnesota Orchestra in the fall of 2007, Rumba Sinfónica has been performed two dozen times by Jorge Gómez’s band Tiempo Libre and different professional, college, and youth orchestras across the U.S. and Canada.   For the 2010-2011 season, Rumba Sinfónica traveled over the Atlantic Ocean and over the Mediterranean and Caribbean seas to receive premieres in Israel and Venezuela.   On November 3, 2011, two-time Grammy nominated Tiempo Libre performed the work with the Jerusalem Symphony Orchestra at this city’s world-renown Henry Crown Concert Hall.  In what Lorenz describes as “a new phase in the life of the work,” Rumba Sinfónica was performed for the first time by a band other than Tiempo Libre this past June 2011 in Venezuela.  A group made up of some of the best musician from the country’s salsa scene performed the work with the Orquesta Sinfónica Municipal de Caracas (OSMC) conducted by Rodolfo Saglimbeni.  The high caliber pick up band was lead by veteran timbal player Frank Márquez and included Guajeo’s singer Edgar “Dolor” Quijada, pianist José Martínez, and trumpet player Marino Zambrano, among others.

“I wanted Jorge Gómez, who was instrumental in this collaboration, to be present and performing on stage at the South American premiere of Rumba Sinfónica,” said Lorenz, who went on to explain that the current political and economic climate of the country made it impossible to bring Cuban-born Gómez to Venezuela for this occasion.  After the Caracas’ premiere, however, Lorenz felt that it was a source of great pride to experience the work performed with such ease by a homegrown ensemble.   “These fantastic Venezuelan musicians were totally committed to the project and seemed to understand its musical significance as though they were co-owners,” said Lorenz, asserting that it made him confirm what he has always believed.  As he put it, “musically speaking, Cuba and Venezuela are almost like siblings.”   Perhaps this is one of the reasons that motivated OSMC Musical Director Rodolfo Saglimbeni to include Rumba Sinfónica in several upcoming programs of their 2011-2012 season.