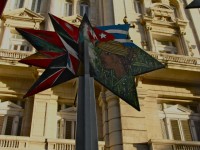 When one thinks of Cuba, one thinks of three things: tobacco, revolution, and music.  However, of these three emblems, music best defines the identity of the country.  Since more than a century and a half, music has allowed Cubans to remain attached to the past while at the same time respond to influences and demands from the present.  Throughout the dramatic history of Cuba —which includes slavery, independence from Spain, U.S. interventions, and a socialist-communist revolution among others—, music has always been there for Cubans to not only record events but to also adapt to them.  During a five-week study abroad program offered by Michigan State University in conjunction with Cuba’s Universidad de La Habana and Colegio San Gerónimo, Ricardo Lorenz will teach courses in Havana that will explore Cuban music as it reflects upon some of the country’s major historical events.

Under the new federal guidelines that make it legal for U.S. citizens affiliated to educational institutions to visit Cuba, Lorenz will travel to the Island with MSU students and with his colleague Rene Hinojosa (College of Social Sciences), who is a veteran of the study abroad programs in Latin American and who has taught in Cuba on several occasions before. Lorenz will pay particular attention to how today, in the city of Havana, music is visibly contributing to stir the country towards a new era, an era in which the old revolutionary culture seems to be merging with a new individual entrepreneurship mindset. After coming back from a site visit to the city of Havana, Lorenz explained that he was most struck by “how humanity exults in Havana; how the energy, talent, and spirit of the Cubans greatly overwhelm the infrastructure of the city and the commodities available.”  While in Havana, Hinojosa and Lorenz met with two of the most distinguished Cuban musicians:  multi-instrumentalist Bobby Carcasses, founder of the Havana Jazz Festival, and

composer and President of Cuba’s musicians union Guido López Gavilán, whom they met at a especial performance of Beethoven’s ninth symphony by the Harvard-Ratcliff Orchestra joined by Cuban soloists and choruses.  Lorenz is planning on having both Carcasses and López Gavilán offer guest lecture-presentations for the MSU students during the four-week study abroad program to take place in Cuba between May 7 and June 10, 2012.