In 1992 former American Ballet Theater ballerina and music connoisseur Fredda Hyman started a chamber music series in the spacious loft she had purchased with her husband Sidney only a few years earlier on Chicago’s West Washington Boulevard.  The series that began with the support of the Hyman’s music-loving friends was cleverly named Music in the Loft.   The Hyman’s loft is situated across the famous Oprah Winfrey Studio. It is large enough to fit about eighty audience members comfortably and it has a spectacular eastward view of Chicago’s skyline.  1992 was also the year I moved to the city in order to pursue my graduate studies at The University of Chicago.   By the time I came to know about MITL several years later, the series had become Chicago’s premiere venue for up and coming performers of classical chamber music. Internationally renowned groups like the Ying, Pacifica, Avalon, Biava, and Corigliano string quartets performed at the Loft very early in their professional careers.

I remember exactly the date I met Fredda Hyman over a phone conversation.  It was Monday, January 12, 1998.  I remember it very well because it was the day my mother passed away.  We hooked up through Lee Haupt, a common friend and former colleague from Daley College, where I taught for several years.  Lee had spoken to me about a unique chamber series and about how its artistic director was interested in incorporating a living composer to her series.  At the same time, Lee also warned me about Fredda’s candid personality.  “If Fredda does not like something, Fredda will let you know,” is how she put it.

As recounted in a Chicago Tribune article about MITL that appeared on November 19, 1998, I put off contacting Fredda for a while, getting myself ready for a sure rejection.  As I learned later, while she did not enjoy abusively dissonant or hermetic music she definitively had a modernist spirit.  She also had a great intuition for the potential of music to engage her audience, no matter the style.  When we finally met and I played some of my compositions, Fredda liked what I was doing.  Subsequently, three of my chamber works were programmed on three different MITL concerts during the 1998-1999 series by, among others, pianist Andrea Schneider, violinist Cornelius Chiu, and cellist Joseph Johnson.  Inserted inside the hand program of each of these concerts was a loose sheet of paper that contained my biography on one side and on the other side a letter from the series’ Board of Directors stating the following:

“Dear Friend of Music in the Loft,

For the past seven years Music in the Loft has been dedicated to offering young and gifted musicians a venue in which to perform.  This season we have proudly added another dimension to our series.  We are providing a venue where the works of a young and gifted composer can be heard.  In this way the three elements of music which make for a performance – composer, artist, and audience – can lead to a dialogue in which everyone can participate.  The composer we have chosen is Ricardo Lorenz. (…) It is our fervent hope that we will have the resources to commission a new work by Mr. Lorenz which would be premiered on our 1999-2000 Music in the Loft series.  We hope that you as an audience join us in the conviction that this new dimension we have added is indeed very worthwhile.”

With this remarkable pronouncement from the Board, which in reality was Fredda’s own manifesto, the composer-in-residence position of Music in the Loft got off the ground. Meanwhile, I was enjoying the unexpected amenities that came along with being association with Fredda Hyman, which included wonderful dinners that she prepared and that my wife Petra and I had the fortune of sharing in her loft over some extraordinary conversation with Sidney as well as many of the Hyman’s friends.

As far as an official Composer-in-Residence program goes, I think that the real game changer came at the end of my first season associated with MITL, when Fredda raised the issue of commissioning me a large chamber work to be premiered on December 2000 at the first annual Jerry Kleiner Benefit Concert.  At the same time, Fredda asked me to be this concert’s repertoire consultant.  Since we were at the verge of a new millennium, it was decided that the evening should be devoted to presenting a Twentieth-Century music retrospective.  As it turned out, because I took my responsibility as consultant perhaps more seriously than she would have liked, I advised Fredda to commission several short new works by local Chicago composers rather than a long new work by a single composer.  I thought this would be more in tune with the retrospective theme of the concert and more interesting for the audience.  Copying an idea from a 60th anniversary commissioning project by the Dayton Philharmonic that I was the beneficiary of a few years before, I recommended commissioning composers very brief works in the spirit of postcards or messages written from the twentieth century to the twenty first century.  Fredda liked the idea, and a team of composers from Chicago that she and I knew was assembled for the commissioning project.  We titled it “Postcards for the Millennium.”  The composers commissioned to write musical postcards for the First Kleiner Benefit Concert were Sebastian Huydts, Lita Grier, Peter Saltzman, and myself.  On the program, our new miniatures were intermingled with classics belonging to the previous century: from Scott Joplin’s A Mexican Serenade and Villa-Lobos’ Bachianas Brasileira no. 5 to Stockhausen’s In Freundschaft and Schnittke’s Piano Quartet, among many others. My contribution was a brief duet for viola and guitar that I titled Twentieth-Century Burnout.

I like to think that the success of this project made Fredda realize that she could reach out to composers whom she did not necessarily have to befriend to the extent we had befriended each other (although she most often did).  I think that the “postcards for the Millennium” commissioning project represented the crossing of a threshold.  Its success gave Fredda the courage to be more adventurous in choosing composers to match the young performers she booked for the series and to trust her instinct about composers as much as she trusted her instinct about performers.  Whatever the reason, already for the following season she had Sebastian Huydts, a fellow graduate student at The University of Chicago, enlisted as composer-in-residence for Music in The Loft.  She never stopped since, and MITL has had a Composer-in-Residence for practically every season since 1998.  Not long after Sebastian Huydts, Fredda went beyond Chicago to seek and select composers for MITL.  Today, the composer-in-residence roster of the series includes composers from all over the country who are also associated with prestigious music institutions, composers such as Pierre Jalbert (Rice University), Carter Pann (University of Colorado), Vivian Fung (Julliard School), David Ludwig (Curtis Institute), and many others.

Fredda was never afraid of taking risks every time she bet on a commissioning project, neither was she afraid of transgressing the boundaries of a modestly budgeted presenting organizations like Music in the Loft.  So in 2007 Fredda joined forces with Cedille Records’ Jim Ginsburg to produce and release a compact disk showcasing works by previous Music in The Loft composers-in-residence.  Funded in part with a grant from The Aaron Copland Fund for Music and titled “Composers in the Loft,” the CD included my piano work Bachangó together with other compositions by Stacy Garrop, Carte Pann, Vivian Fung, and Pierre Jalbert.  The Cedille Records release received praise from music critics and Strad Magazine chose it as March 2008 chamber music recording pick of the month.  I know that for Fredda “Composers in the Loft” was a triumph and a source of great pride.  I think it solidify her commitment to the composer-in-residence program.

Bachangó, included in the Composers in the Loft CD, was the very first work of mine that Fredda heard and, I suspect, it is the reason that drew her to my other compositions.  This kaleidoscopic Latin music fantasy was programmed many times in several seasons of MITL, most recently at the 2011 Kleiner Benefit Concert performed by pianist Marta Aznavoorian.  Her splendid interpretation of the work appears in “Composers in the Loft.”  I used to joke with Fredda about Bachangó being OUR song.  This is why I find it a beautiful and at the same time an eerie coincidence that the last project Fredda and I worked on before her departure involves pianist Anthony de Mare, a champion of new music whom I met in the 1980s also through his many performances of Bachangó.  On December 11, 2011, with the blessing of Fredda and the patronage of the series’ current artistic director, Anthony de Mare was scheduled to give the Music in the Loft premiere of his ongoing project titled Liaisons: Re-Imagining Sondheim from the Piano. This mammoth project gathers piano adaptations of Stephen Sondheim’s songs especially commissioned from heavy weights like Steve Reich, William Bolcom, Frederic Rzewski, Fred Hersch, and a dozen others.  My contribution to Liaisons, commissioned by Music in the Loft and titled The Worst [Empanadas] in London, is a tongue in cheek, south-of-the-border take on two classic songs from Sondheim’s masterpiece Sweeny Todd.

Due to the rapid deterioration of Fredda’s health, the MITL premiere of Liaisons had to be postponed.  To my great regret, she and Anthony never got to meet nor did she get the chance to listen to the last work she was responsible for commissioning.  The Worst [Empanadas] in London is the fourth commission I received from Music in the Loft.  In addition to my “Postcard to the Millennium” for the first 1999 Kleiner Benefit, I received two subsequent commissions, both involving the phenomenal Pacifica String Quartet —a regular at Music in the Loft— and both including an additional instrument.  In 2000 I was commissioned Puente Trans-Arábico for string quartet and Middle Eastern percussion, and Al Otro Lado del Rio for guitar and string quartet was commissioned in 2006.

Although I am deeply sadden by Fredda’s departure, I am comforted by knowing that she is relieved and freed now to continue on inspiring countless of people from a privileged vantage point.  Fredda has now entered the pantheon of the muses. My twelve-year association with Fredda and Music in the Loft makes me feel enormously proud and grateful yet also somewhat remorseful at the same time.  I regret the fact that until only months before her passing away, even under her frail condition due to the illness she suffered, Fredda was pouring energy into finding sponsors for yet one more commission.  I regret not having seen Fredda in the months before her death or, simply, not having gone to more performances at MITL, especially while I still lived in Chicago.

While it is not possible to appropriately reciprocate all she did for my family and me, I offer to continue on composing in return and in honor of her uniquely creative spirit, her humanity and generosity, the love she and Sidney had for one another, and the love they poured onto their musical loft. I will also continue to spread the word about this most miraculous chamber music series founded by Fredda Hyman knowing that her spirit will continue to live in every single performance of Music in the Loft. 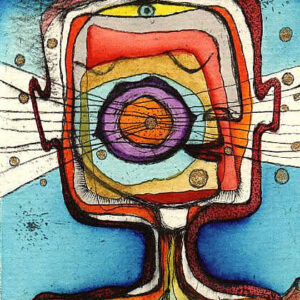